(This is the latest in the Mastering Magick series of blog posts that I've been putting together for the Magick.Me blog. The previous entries in this series include How Far Can You Go in a Year?, The Core 3 Daily Practices, and 4 Keys to Altered States of Consciousness.)

"There are then... four elements, without the perfect knowledge whereof we can effect nothing in magic... from these, through them, proceed the bindings, loosings, and transmutations of all things, the knowing and foretelling of things to come, also the driving forth of evil, and the gaining of good spirits."

One of the first things you'll come across in books on magick is a description of the four elements—fire, water, air and earth.

OK—just what are these things? I mean, OK, fire, water, air and earth are obviously things that exist in nature, but what exactly do they have to do with magick—the art and science of changing your consciousness?

The four elements are indeed critical to magick, but we need to be very clear about what they are, so that you understand how to master them!

So, first things first: The ancient Greek philosophers believed that all matter in the universe was put together out of combinations of the four basic elements. (You can read Plato on this, for instance.) For example, the ancients observed the changing states of water: when inert, water is simply the element water. When heated, it becomes like the element fire: it boils, and can burn you, or cook food. Indeed, when heated (by fire), it gives off steam: the element air. Finally, when frozen, it becomes ice, hard like the element earth. Therefore, concluded the ancients, all things in nature were simply combinations of the four basic elements.

This view of the nature was spread throughout the world, all the way up to the scientific period. You can find the theory of the elements not just in ancient Greece, but in medieval Europe, in India, in China, and in many other times and places.

Of course, the idea that the world is composed from four basic elements is not scientifically accurate. We now know that nature is made up of a lot more than four elements: We have the periodic table of the elements, which now lists a total of 118 elements, from Hydrogen to Oganesson. The periodic table, by the way, directly evolved from the old conception of the four elements. We just know a lot more about the world now.

OK... so what? Why do we need to know about an old theory of the world? 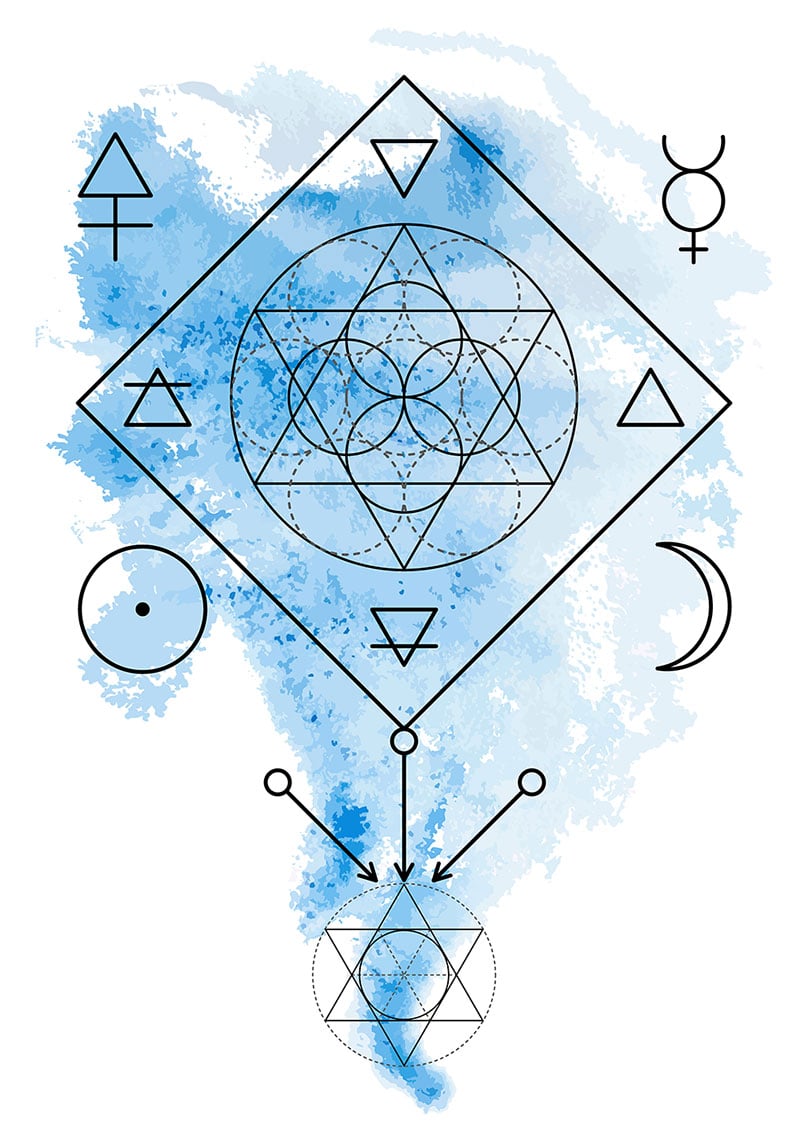 So let's break down the four elements one by one. Remember, what we're concerned with here is the elements as they manifest in consciousness—so that by bringing them into balance and harmony with our own selves, we can work towards perfecting our own lives.

Fire represents the igniting impulse of thought and of Will. It is the spark of inspiration, the AHA moment. It also represents your fundamental animating life force, the FIRE that causes you to do what you do. When you talk about feeling "fired up," or being creatively "on fire," you're experiencing the element fire in its psychological aspect. This is the element that people often try to overbalance in their psychological make up, and often end up overdoing it. For instance: If you've ever chugged one too many Monster energy drinks trying to get something done, you've certainly been trying to push your elemental makeup towards the fire element. And when you've crashed afterward, you've also felt the inevitable effects of too much fire! Too much psychological fire can also cause anger, aggravation and stress; not enough can cause weakness, diffidence and lack of motivation.

Water represents the receptive impulse of thought. It is your ability to receive inspiration from the universe. It also represents your emotions, and your ability to be in tune with them. Artists and empaths are excellent at working with the element of water: Of creative inspiration, dreams and emotional intelligence. With the right amount of water element, you can receive great insights into your life, your projects and your relationships (of course, if you don't have enough balance with the fire element, you'll never have the willpower to actually make your great ideas into tangible things!)

Air represents the intellect, and reason. It is the logical faculty, the ability of the mind to analyze and reason through situations. This is the element of all great mathematicians, scientists, lawyers, programmers and anybody else who works with pure intellect. With enough of the air element, you can reason through complex situations that would easily overwhelm others. But too much, and you can easily find yourself in "analysis paralysis," unable to actually take any actions because you're too caught up in the rational mind. Without enough water—intuition—or fire—willpower—you can easily find yourself lost in your own indecision. But with not enough air, you can have all the willpower and intuition you want, but you could still easily find yourself taking rash and irrational actions!

This isn't the only way to think about the elements, but it's a good start. Once your start getting a handle on the elements as aspects of your own psyche, then you can start thinking about how to balance them. Get all four elements balanced and working in harmony, and you have everything you need to do anything you want in life (classical magical rituals like the Golden Dawn pentagram rituals, as well as meditations like Tattva scrying—both of which are covered in our Magick.Me courses—can help immensely with this).

If they're out of balance, of course, you'll find yourself getting in your own way and constantly throwing off your own plans and frustrating yourself, because you'll be all out of whack and dancing through life like you have two left feet. (I've been there!) This is why balancing the elements, which is one of the most basic of all magical exercises, is also the most important—and needs to be persisted in as a regular, hygenic activity.

Of course, it gets much more elaborate from there—extending into planetary, zodiacal, sephirothic and even more complex layers of work (don't even get me started on the Enochian watchtowers...)! But working with the elements should be one of the central cores of your entire practice—get a sense of what they are, how they manifest in your own psyche, and how they manifest in your world, and you'll be well on your way to a much greater understanding of magick and a much deeper set of tools for working with your own consciousness. (For lots more tools on working with the elements, banishing, invoking, meditation, sigils, evocation, invocation and lots, lots more, you can start learning more at Magick.Me, our online school for magick, linked below.)

Good luck with your practice, and see you in class!

At Magick.Me, you can learn magick and meditation—anywhere, on your own timeline. Supercharge your life with empowerment, clarity & purpose. Stream in HD to any device. Binge or take bite-sized units one by one. Build your skills. Become who you are.

Magick∴Me exists to bring the teachings of the great esoteric traditions of the world to a new generation of students.

The goal of these teachings—from Eastern meditation to Western ceremonial magick—is the practical training of the mind to achieve and maintain single-pointed focus, so that it can bring the totality of its power to bear on mastering life, one moment at a time. It's a common saying that you can do anything you put your mind to. Yes, but only if your mind is properly trained—just as your body must be properly trained to run a marathon.

We seek to do three things:

1. Modernize the world's esoteric traditions for a new audience, with all of the obfuscation, dogma and dress-up games removed, and the essential core teachings presented clearly and rationally.

2. Provide students with effective tools to master their own minds and beings, and thereby to gain the true magical power: Power to live the life they choose, on their own terms.

3. Present spirituality as a creative individual art form, a realm of scientific experiment, and a wide world to be explored by each student in their own unique way, instead of as a set dogma or creed.

Have a support question? Get in touch here: