This week, I was invited to be a guest on the Tin Foil Hat With Sam Tripoli podcast in Los Angeles, and got to sit down with the hosts and unleash occult secrets on their unsuspecting audience.

Too many secrets, actually. Well, too late to take it back now...

The show was filmed in glorious HD—check it out below for an awesome, entertaining and enlightening hour. (The show's audience has decided to dub me "Woke Bruce Banner," apparently.)

We actually cover a significant amount of material in the show: what kundalini (aka "the Serpent Power") is, kriya yoga, the difference between esoteric yoga and commercialized yoga, John Dee, Enochian magick, Robert Anton Wilson, Indo-European paganism, how humanity is waking up from the narrative portrayed by the powers that be (and how the powers that be are pushing back), and lots, lots more.

It's a light-hearted and fun but also at times very substantial conversation and I had a lot of fun doing it. Please enjoy the show!! (It is also closed captioned, for those who have asked for closed caption material!)

You can also listen to this as a podcast on Soundcloud, iTunes and Stitcher.

You can still catch my latest appearances on the Duncan Trussell Family Hour here and on Leak Project here, where I get into some serious territory on Enochian magick, Thelema and the Eastern yogic and tantric traditions. (I also just did a longform print interview with Disinformation here).

BOOK UPDATE: Inner Traditions, my publisher, has informed me that pre-orders for my new book John Dee and the Empire of Angels have greatly exceeded expectations. I am blown away, and very grateful to everybody who has ordered a copy!! This also makes it even more likely that the first print run will sell out quickly, and then go up in price on the collector's market. (As I've mentioned before on this blog with some amazement, he first edition of my book Thee Psychick Bible with Genesis P-Orridge is now being sold for between $775 and over $1,800 on Amazon—take a look.) So make sure to grab your copy before they're gone—they're going a lot quicker than we thought! (Link below.)

The Secret History of the End of the World

John Dee and the Empire of Angels: Enochian Magick and the Occult Roots of Empire. Get the new book from Jason Louv now! 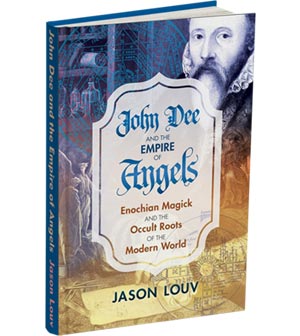 "John Dee is the original Elizabethan mage-scientist, who invented the British Empire and invested it with magical power. He is to Elizabeth what Merlin was to Arthur, except he was real. Here's the original technology of weaponized memes, psyops, and empire building in a gripping, authoritative account of how and why we became an occult society." – Douglas Rushkoff, Throwing Rocks at the Google Bus

Curious is a well-structured, content-focused and easy to set up Ghost theme with a bold design. Perfect for an online magazine, journal or even a personal blog. Explore it yourself.

Have a question, idea or feedback for Curious? Please do not hesitate to get in touch: